It was a big day last Monday after a huge Flickerfest weekend. We harvested grapes for over 9 hours, Richard and Sam relaying the 6 tonne trailers back and forth to the Windowrie winery, clocking up 40 tonnes of Shiraz and Merlot for the 2011 Rosnay Triple Blend. This is the last pick before the Cab Sauv, the final hurrah whose date depends on how the canopy holds up as autumn washes over us.

It was not without incident… we had three trailer tyres blow out on us towing the grapes to the winery. But after the battle to get a crop of good fruit over the last season a few tyres didnt slow us down.

In our last vintage report we focused on Downy Mildew, and whilst we had passed farly well through the first half of the season and avoided the brunt of the downy mildew, we still faced the hardest months before we could bank on a crop. The greatest challenges to the grape grower after christmas is late season powdery mildew and then botrytis. Well, we didnt worry about “the bot” as organic vineyards dont get it, or not nearly as much, as conventional (with a good example of that in Orange this year). Our bigger concern was 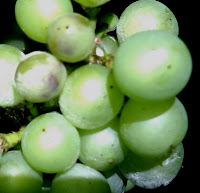 It was 9 years ago but it seems like yesterday… We were out selective hand picking chardonnay in February 2002. Tonnes were being dropped to the ground. The winemaker’s nostrils were flaring over our shoulders as he made sure we didnt pick any infected fruit. Fruit with the mildew on it has a strong musty or mushroomy smell and flavour.

This is not like downy mildew, whose cost is mainly loss of yield early in the season. In some ways it is a cheap way to thin a crop if there is too much of it whilst it doesnt affect the quality of the final crop anything like powdery mildew does. So, Powdery wins the best baddie competition for us. A good place to learn about the basics of these two diseases has been some new fact sheets produced by the Grape and Wine Research and Development Corporation:

“There are more differences between the two mildews than similarities, so the name ‘mildew’ for both can be misleading. Until recently, both were considered fungi (downy is now classified an algae) and both pathogens produce a mildew (‘mele deaw’, Old English for ‘honey dew’). This name derives from the thin coating of white mould that both diseases produce on infected plants. That is about where the similarities end. Powdery mildew is well named – something that is ‘powdery’ is ‘fine and dry like dust’. This associates well with the conditions in which powdery spreads – in fine, dry weather. Although it grows better at higher humidity (unlike downy, which needs rainfall and leafwetness), powdery can spread without free-water.”

Up until Christmas all we had done was prevent powdery mildew with the traditional sulfur sprays, and some BD and teas. Sulfur is not a curative, and it doesnt strengthen the vine from within. By late December we saw some in the Chardonnay (see photo). We have always seen Christmas as a kind of safe cutoff for powdery, but this season we didnt achive that and also the season was later. When we saw spores on Cabernet in early January, we suddenly realised we had a long way to go still, and we had no choice but to pull out all the stops to keep it from spreading. We had to change tack.

As we are not a research station, please excuse the lack of thorough controls for the things we did during that month, but what we know now is that one of them, or a combination of them, stopped the mildew. Here is a summary of our January program:

29 December: Sprayed the whole vineyard with copper and sulfur. We thought this was our last spray for the season.

5 January: Realised we had powdery in the Cabernet and Shiraz to lesser degree. Started doing a lot of research and talking to product suppliers and other growers.

8 January: Sprayed “Renew”.  We came across this product whilst trying to locate a product suggested by one of our blog readers: Bio-N (thanks Tony!). Aparently Bio-N can destroy midew, so we looked up the people who sell it, and came across the former BFA director, organic farmer and owner of Munash Fertilisers: Ian Munro.

Well actually it wasnt Bio-N, which he also sells, but a new product called Renew, which Ian recommended, mainly because a flush of nitrogen is never a good thing as you approach harvest. According to the Munash website,  “Renew is a mineral liquid fertilizer with derivatives from the sea. It contains a balanced proportion of trace elements which has a natural composition similar to what is found in humans. Renew is full of minerals and the plants absorb the minerals as nutrients very quickly.”

We sprayed Renew on the whole vineyard at the very low rate of around a cup per hectare of concentrate, mixed with 5litres a hectare of molasses brewed in our flowforms. Feed the beneficial microbes with the molasses, kick them into life with renew, and maintain the beneficial microbe population with later sprays of molasses only (which we didnt do). Look at the foam as it brewed in the flowforms for a few hours before spraying!

11 Jan: Sprayed Eco Carb. We’ve used Eco Carb plenty of times… Without being sure if it was working. We had seen our own and other vineyards suffer mildew despite plenty of the stuff being used. However, late in the season there is not much else to use (apart from milk, which may taint the wine if used late int he season), so we sprayed sulfur and Eco carb on the reds.  How it works is summarised on the site: “EcoCarb is based on activated potassium bicarbonate and a proprietary surfactant system that increases the distribution of bicarbonate ions over plant surfaces. EcoCarb changes the pH on leaf surfaces to highly alkaline as well as creating a strong osmotic imbalance between microscopic organisms and the surrounding solution on the plant surface. This has the effect of severely disrupting spores and fungi cell walls. EcoCarb is registered for the control of Powdery mildew in Grapes and Roses.“

We think it worked this year, as a curative but still combined with sulfur. Within a day there was a browning of the normally silvery powdery spores in the Shiraz.  However to do it we had to borrow a better spray unit that could push it right into the bunches in the middle of the canopy at a high water rate of 1000 litres per hectare. So often, that is the key. Winter job: modify our sprayer.

16 Jan: Sprayed Phos-Life.  Queenslanders will never forget the floods of January 2011, and the reality sometimes only hits us in other areas when transport is cut. In our case we wanted to get hold of a diatomaceous earth product called Dia Life, from Nurti-Tech in QLD. We read that a “milk” of diatomaceous earth, rich in silica, could control powdery mildew. But bBecause of the floods we couldnt get any of it, and had to take a locally available alternative from Guy Webb of Gaia Consultancy at Forbes: Phos Life.

According to Nutri-Tech’s product spec sheet, “Phos-Life contains high levels of calcium. Calcium and phosphate are the governors of plant health and high brix levels. Calcium and phosphate are normally incompatible in ionic form, but not in micronised, colloidal form. The combination of plant-available calcium (26%) and phosphate (10%) generates tremendous energy in the soil. Phos-Life also contains a rich lode of trace elements, including good levels of zinc. The mineral component can become plant available within days.” It also contains high levels of Silica (14%) which was the main mineral we wanted in the diatomaceous earth. We sprayed Phos-Life on the reds.Their leaves seemed to darken up after it.

30 January: Sprayed BT and BSub. As we approached harvest we stopped the nutritional / pH approach and concentrated on microbes: Bacillus Subtilis for powdery mildew and Bacillus Thuringiensis  for the caterpillars that were right out of balance and defoliating vines. The BT certainly worked (even a 4 year old bucket we had worked!), and the B-Sub may have helped slow the powdery mildew, but not sure. Thanks to Guy Webb for giving us the B Sub.

4 February: Harvested 8 tonnes for vintage chardonnay sparkling base, 90% Chardonnay and 10% Semillon at 9.8 baume. The fruit had good flavour and the best acidity we have had: 11 grams per litre natural acid.

14 February: Harvested 14 tonnes for sparkling rose base from Shiraz (92%) and Mourverdre (8%), again with good fruit at low baume and plenty of natural acid.

28 February: Hand sprayed EL400.  As the table chardonnay harvest approached we had one more string in our testing bow, which in this case we sprayed by hand on just a few infected bunches of Chardonnay and looked at them the following day. The product was EL400, recommended to us by an old friend, Stafford Lowe. His email summarises what it is: “I can send some neutral anolyte down to you to try. This is a bacteriocide/virocide/fungicide made electronically from salt and water (organic). It is not chlorine although chlorine/oxygen compounds are produced. I would produce it using potassium chloride rather than sodium chloride. My own experience with this has been quite successful with powdery mildew. May I suggest you look at the manufacturers web site  www.envirolyte.com .” Stafford sent us a few litres to sample and we should have used it earlier than we did. It has huge potential. Perhaps a project for the GWRDC?

7 March: Harvested 15t Chardonnay and Semillon for table wines, 12.8 baume, good fruit and acid.This was a major relief, as Chardonnay is worst for mildew.

15 March: Winemaker suspects some powdery in Shiraz. Some slightly musty smells and other crops already being rejected. We faced a decision as to whether to pick it at 12.5 baume and risk making a light red with green characters, in order to avoid losing the crop all together to botrytis if the season turns wetter. We chose to “call a friend” and rang David Bruer, pioneering organic vigneron from Langhorne Creek. He gave the hard answer, which was the right one. “Leave it”.

23-24 March: Biodynamic ripening spray. As soon as possible we ordered horn silica, potentised equisetum and summer horn clay and sprayed it on the whole vineyard yet to be harvested – the reds – at the rate of 40 litres a hectare as a fine mist with the suzuki ute and two nozzles.In 2004 we increased baume by 2 in a week (almost over-ripening it) by spraying for three days in a row at sunset. This time we only sprayed it for 2 days and we also included the herb equisetum to help dry out any fungi. In December we also sprayed equisetum tea (see our Youtube video) at around moon-saturn opposition… Or just say, during the peak hot and humid mildew conditions.

28 March: Harvest 40t Shiraz and Merlot, at 13 baume, and the winemaker is happy: no mustiness and good flavour. As we replaced tyres and cart the fruit to the crusher, I thanked life for throwing challenges like mildew at us, as it helped connect us with amazing people who made the challenge winnable.

Some might call it management on the run, and its true. We know that something we did worked. Next year we will have to plan and simplify things and/or start some things a lot earlier. Your suggestions are of course VERY welcome!