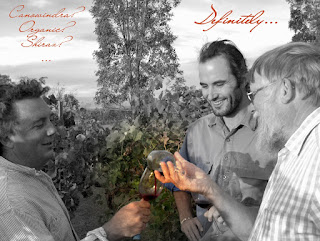 They had less Botrytis at harvest and better colour and structure in the finished wine. It was apparent across red varieties (Shiraz and Merlot and to a lesser extent Cabernet) but was not an issue for whites as it was dry during the white harvest.

I’m still scratching my head on the above but the wine produced by the organic blocks is definitely some of the best we have in the winery in what was an extremely difficult year.

About Jason (pictured above with Sam Statham from Rosnay and Herb Gardner from Gardners Ground): Jason O’Dea completed Viticulture at Charles Sturt University in Wagga Wagga in New South Wales in 1994. In 1996 he travelled for 18 months on a global vineyard discovery tour, studying different viticultural practices in North America, South America and Europe. Since returning to Australia, Jason has applied this knowledge to the management of Windowrie’s vineyards while developing new ideas for further improvements to wine quality. Windowrie makes wine on contract for Rosnay and other organic vineyards in the region.
www.windowrie.com.au
www.piginthehouse.com.au