Olives… The year that was 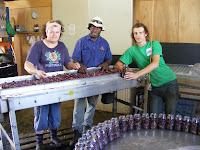 Olive harvest was in mid May. We harvested about 9 tonnes of oil olives, over half of which was contracted and leaving us with only about 600 litres of olive oil. We had a tough season, but we are not the only ones. The crop in many parts of Australia is said (by our harvest contractor) to be half last year’s. No solid figures, but that made us feel better about our own yield, which is down 30% on last year. Our oil yield (litres of oil per kg of fruit) was also down.

So, we are having to tell our valued olive oil customers that they are on allocation for the oil that we will be blending and bottling this week. If you want to be sure of getting some oil, contact us ASAP!

The kalamatas were also down about 50%, at about 5 tonnes total harvest. On a positive note, the fruit is riper than last year and much of it is bigger. They are now bedded down in Murray River Salt brine, pickling away slowly. Last year’s fruit has been selling well and most recently won Silver in the 2010 National Table Olive Awards. 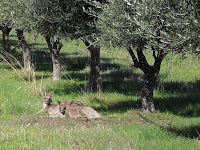 Why the low yield? Most pundits blame the drought and the hellish weather we had during flowering last spring. Others say it could be good old biannual bearing. Either way, it is a year for quality not quantity. We just hope the drought will end soon, with much needed rain to replenish the soil reserves and a less hot and windy flowering period next spring…