Is it organic? A healthy reality check…

by Sam Staham
Sometimes you read or view something that challenges your beliefs. Its generally quite a healthy little seed of doubt in the window box of your world view, that grows until you can no longer ignore it, but need to double check your thinking software.

“Is it Organic”, by Mischa Popoff, is one such book. A friend of mine and organic farmer lent it to me. Popoff’s 600 page book was published last year in the US, and its the most vehement attack on organic farming certification and practices that I have read. Popoff claims to be a believer in organics, and bases his authority on the fact that he was once an organic farm auditor, and is the son of a farmer.
Popoff’s main gripe is the fact that organic certification does not require routine and/or random product and paddock testing for chemicals. This main grievance is built up with a host of angry accusations, calling organic farmers luddites and suckers for idealistic urban elites, calling organic food too expensive and no more wholesome, calling certifiers corrupt with vested intersts, and calling the government a fascist conspiracy.

I had to wade though a lot of emotional words to get to the realisation that Popoff, however angry he is at having been marginalised for his views, does raise a fundamental issue.

This is a question that actually came up a decade ago as the Organic Federation of Australia presented its position on GM (genetic engineering) contamination to government and industry forums. The big boys like Cargill would ask, “Why not simply introduce a threshold for contamination and test organic products?”

The GM issue, which is coming to a head with the Steve Marsh contamination in WA, shows clearly this distinction between organics as a product versus organic as a process. In its decision to decertify all affected areas of Steve’s farm, NASAA referred to the newly introduced Australian Standard 2000-2009 Organic and Biodynamic Products. Developed with government involvement and support, the standard states in its opening paragraphs: 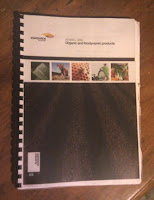 On this basis, given that GM is prohibited from organic farming processes, Steve’s organic certifier had no choice but to decertify all affected areas of his farm: The genetically engineered plants and their progeny are growing within the production process and therefore pose an unreasonable risk to integrity of the organic farm, crops and livestock (precautionary principle). This is a more fundamental and reasonable response than imposing a threshold and testing regime on Steve and the downstream supply chain.

I admit that I was unable to stomach much of Popoff’s book, so I flicked to the final chapters and was not suprised to read him attacking the GM free policy of organic standards.  If I had the time to read all 600 pages I could do a better book review, but the conclusion would probably be the same: We need to avoid the bureaucratisation of organic certification, and we need a strong and independent peak body for the organic movement if it is not to lose its way and suffer from attacks like those of Popoff.

By bureaucratisation I mean the fact that every input I use as a farmer has to have organic certification now. If it doesnt, I have to apply to our certifier to use it. For example, I wanted to use a yoghurt-based product for powdery mildew this season, I wrote a detailed request in the beginning of January, and I still have no answer, four months later. I know its fine to use, but I asked the office, just to be safe, and as a result I couldn’t use it even to save the crop. You could say that some of the organic certifiers have extended their reach too far into the input supply chain and are dragging their feet in allowing farmers to use products not making revenue for them. Likewise downstream in the chain – last year we were charged an extra $250 to inspect our wine warehouse – as if anything can contaminate finished, bottled and labelled wine! Meanwhile we pay 1% of turnover to promote the company’s logo, rather than organics generally (however, there are other less top-heavy certifiers, that dont charge a levy, if you can afford to change over your labels).

By a strong and independent peak body, I mean the Organic Federation of Australia. I resigned form the OFA committee a decade ago to focus on our farm and family, and ever since I have watched it being attacked by competing elements of the “Industry”, whose vision is to have one dominant certification company to lead us.  If this continues, and there is only one victor in the “battle of the logos”, there will be much more potential for Popoff’s scenarios to materialise. In a natural ecosystem, cultural diversity gives stability, while monocultures are more susceptible to pests. I believe now more than ever that we need certain certifiers to stop attacking, and instead join and support the OFA now and be part of a culture of diversity with one unified voice for our Movement.

In fact, its becoming tempting to abandon organic logos altogether, as we are now doing, if it helps put an end to the competitive “logomania” of the certifiers today, and focus on the job at hand: growing clean and healthy organic food as part of a popular movement towards organic living.

10 Replies to “Is it organic? A healthy reality check…”