The dust, or rather the mud, has finally settled after a marathon 2012 vintage of Rosnay organic wines and figs, and so we have time to post a brief rundown:

The season was very mild, in fact we could hardly call it a summer as there was only 5 days over 35 degrees maximum, and only 22 days that got over 30 degrees. Meanwhile we had regular rain and we hardly needed to irrigate at all. The biggest issue early in the season was keeping the grass down and managing the rampant canopy growth in the Shiraz. The new Fischer mower did a fantastic job, as long as you dont push it too hard and chop through the occasional vine trunk with it. It has a sensor that tiggers the hydraulic mower heads to move around the vines and mow the weeds under them. For controlling the canopy of the Shiraz, which by December was nearly touching between the rows, we began with hedge shears, and then upgraded to a petrol hedge trimmer mounted on the front of the suzuki ute, which did a fantsastic job as long as you drove very carefully.

Like last vintage we had serious mildew pressure, but this time we kept on top of it with sulfur and vegetable oil, and we got through to Christmas without powdery mildew. It was not until after the Chardonnay was harvested that we found mildew on some on the foliage, but that no longer mattered much. Meanwhile the floods came and put a real dampener on our expectations, but the reds actually held up amazingly well, again reinforcing in our minds that organic and biodynamic methods are the best especially late in the season, as many non-organic vineyards in the region had to abandon their reds. Due to the late season disease pressure, I again will avoid drinking mass produced conventional reds from 2012, as plenty of spraying was necessary.

Looking back now, as a result of the mild season, the vines actually cropped very well, and the quality in some of the vineyards was the best we have ever had, especially the Chardonnay, Merlot and Cabernet.

These are my diary notes for the Rosnay 2012 Vintage: 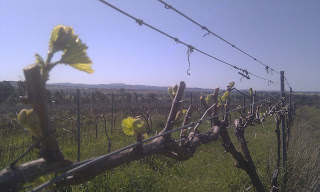 15/9/11 Chardonnay, just kicking off with a nice budburst. 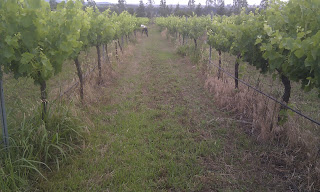 30/11/11 Mourvedre, like the Shiraz, is vigorous and needs shoot thinning and trimming already if its not going to go feral. 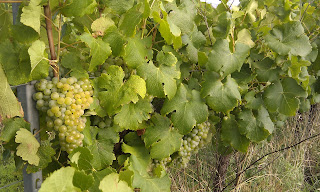 27/1/12 I took this photo of the Chardonnay almost ready for picking for sparkling base. Some fruit exposed but not sunburnt and the majority nicely shaded with great acid. 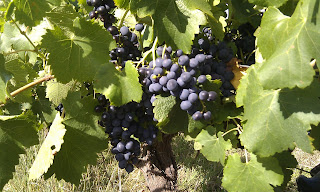 28/1/12 I took this photo of the Shiraz ripening nicely after a slightly delayed veraison (when they turn from green to red, around new years day).

4/2/12 Today the harvest began with 18 tonnes of Chardonnay sparkling base. It is first made into the base wine at Windowrie before being sent to Vinpac for the pressurised fermentation (Charmat method). 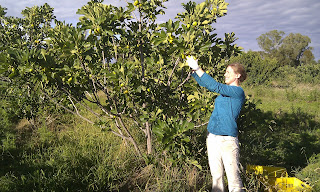 11/2/12 I took this photo of our Aussie WWOOFer George picking the first figs of the season. Looks like a big crop could be coming off, as long as it doesn’t rain! 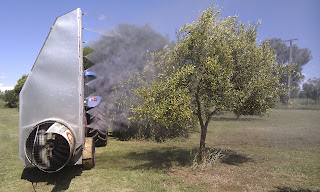 13/2/12 I took this photo of our new beaut olive sprayer. This will keep those pesky Lace Bugs under control!

14/2/12 Today we hear that the NSW government allowed uranium mining. The vines dont like it. Herbicide drift is bad enough. 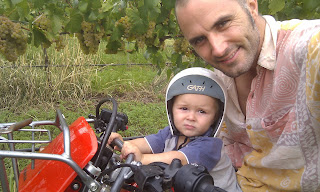 26/2/12 Floyd and me taking Chardonnay samples… Nearly ready to go.

28/2/12 Today we picked the Semillon (15 tonnes) and the rest of the Chardonnay for table wine (18 tonnes). The fruit is nice and ripe at 13 baume and some delicious stone fruit flavours already coming through. For the first time since 2007 we will be making a straight Semillon, and also a small amount of straight table Chardonnay. 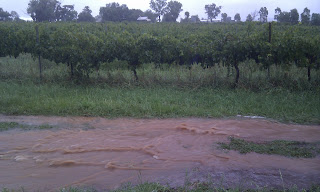 2/3/12 Today is the third day of solid rain which totals almost 200mm. I took a photo of the “Little Belubula” flowing through the Merlot vineyard. This coincided with the Shiraz being almost ready for harvest, and quite high in sugar (nearly 13 baume).

13/3/12 Picked the Shiraz, total of 60 tonnes, part of which for another organic winery. Two weeks after the rain, we still got bogged twice. Baume was just over 12, however the flavour was very good, with fully ripened seeds and stems. Tannins are soft and ripe, and no nasty smells of botrytis in the must. Winemaker is happy. 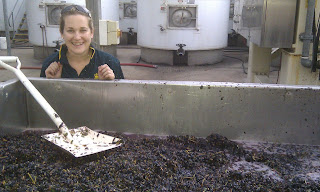 16/3/12 Picked the Merlot, total 13 tonnes. No breakdowns. Didnt get bogged, but only just got the fruit in before we got hammered by a storm and 40mm of rain. I took this photo of Michelle checking out the fruit, of which about one third was open fermented, and plunged twice a day at the winery by Oli. It will then be blended back into the tank with the rest of the Merlot, and the resulting wine should be fantastic. 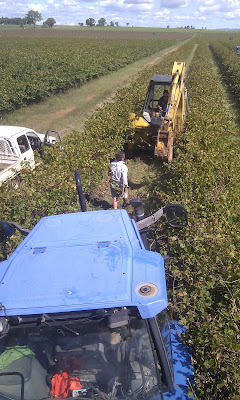 17/3/12 Interesting day, helping harvest at Windowrie. Jason wont mind me posting a photo of him getting his tow behind harvester out using a backhoe.

24/3/2012: 130 people watch Flickerfest films under the stars and enjoying the Rosnay wines under perfect starry skies.

27/3/2012 Picked the Cabernet, 23 tonnes. Whilst our refractometers said we had 13 baume, the juice arriving at the winery was 15 baume. The Cabernet ripened amazingly well, wityh zero botrytis infection and we didnt get bogged. 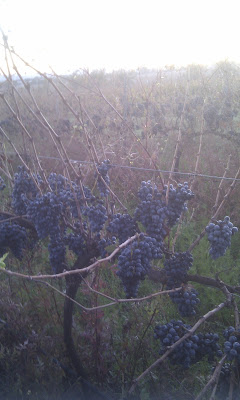 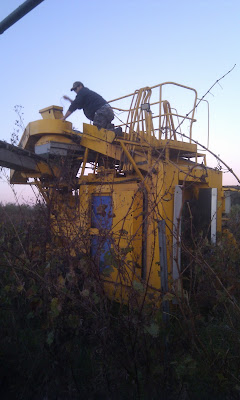 13/4/12 I took a few photos of the last block to be harvested: 6.5 tonnes of Mourvedre from in front of the guest cottage. Whilst the remainder of the wine is at Windowrie, this is being made at Madrez as a small batch of our first ever Preservative Free red wine. Some great jammy flavours and nice and ripe at 13.3 baume. We cant wait to see what Chris does with it. The photo includes Ted clearing out a blockage, getting nice cold fingers on an almost frosty morning.

16/4/12 The 100 Mile Dinner, a last hurrah for the vintage as 350 people had a glass of either Rosnay or Phillip Shaw sparkling wines as they arrive at the iconic dinner event in the main street of Canowindra. Happy days – let the organic wine flow!