Organic farming – why are we doing it?

Its harder. We make less money. We have a lot of explaining to do to our neighbours. We are in fragmented and fringe industry. But, we have been growing our grapes, olives and other crops organically for over 13 years. Why?

Is probably because we believe its the best way to grow food, and we are not alone. Albeit from a small base, certified organic agriculture is the fastest growing food sector in the world, and most recently IBISWorld said it had the best growth potential for Australia too this year. 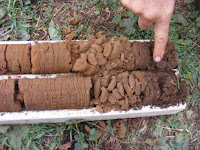 The reason for this post is not only a “reality check” after 13 years of doing it, but also a response to many people in the aussie wine industry who continue to “poo poo” organics, especially from scientific circles. The wine industry has proposed an alternative “eco” label, but nowhere in the scheme is organics recognised as good enough to be automatically compliant. It didnt even get a mention in a recent presentation we went to. Well as an organic grower, it would seem that there are a lot of conventional growers in this country who want to jump on the eco bandwagon but who still cant make the paradigm shift to drop the use of chemicals. For us, the paradigm shift was based on three main realisations: 1. Weeds are nature’s soil builders; 2. Pests and diseases are symptoms of other problems; and 3. Nutrition is about feeding the soil, not the plant. And besides, poisons are bad for our health.

Of course, it is good to document how many trees you have planted to offset your carbon emissions, or how much you have reduced your water and energy use with technology to get a green “tick” on your product, but if you are still using artificial fertilisers, herbicides, fungicides and pesticides, you have not made the shift. We don’t pretend to have all the answers, as the answers are different for each grower, but we think we have made the shift. We have done plenty of trial and error, and we have had plenty of researchers look at what we have done. Looking back over the last 13 years we have been growing crops organically, these are some experiences:

1. Weeds are nature’s soil builders
It was a permaculturalist from Cowra who first said to us, “pattersons curse and all other taprooted broadleaf weeds, are nature’s crow bars“. Its a great concept. Rather than spray out those bloadleaf weeds, why not leave them since they are opening up the soil with their roots, bringing up nutrients from down deep as they grow, and creating channels for worms and water to go down as they decompose? We did, and after a few years we saw the main “offenders”, pattersons curse and capeweed, virtually disappear, to be replaced by grasses and clovers. Grasses are slightly different, as their shallower matted root systems decompose they build a lot of organic matter in the topsoil. Meanwhile the clovers are amazing fertiliser factories, working in symbiosis with soil microbes to turn atmospheric nitrogen into plant available nitrogen. By seeing weeds like this we can stop cultivating to loosen our soil, stop importing expensive materials (eg biochar) to build soil organic matter and carbon, and we can stop burning fossil fuels to produce bags or tanks of plant available nitrogen. Just let the weeds do it! 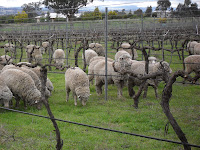 On Rosnay, we found that such a nice idea doesn’t always play out in reality, and its hard to find the right balance between the idea and the need to harvest next year’s crop. We have tried a lot of things to “manage” our weeds. Mowing rather than cultivating them is ideal as it reduces the competition with the vines without damaging the soil. However, you cant mow under the vines without expensive and/or dangerous equipment. Grazing with sheep does the job beautifully in winter, but its not an option once the vines start to shoot in Spring, and in the olives, you have to watch out they don’t ringbark the trees. Spraying with vinegar or pine oil to knock back the most vigorous, competitive weeds like Johnsons grass is costly and not really effective. They just grow back! Chipping weeds by hand works – but would you like to come out and do it?! During all our trial and error, we hoped that eventually the soil will become so fertile that the weeds don’t matter. Well, this year we finally bit the bullet and bought an expensive undervine mower, and so far, it looks to be our best decision yet, leaving a nice low mat of weeds under the wines. We’ll keep you posted on how it worked for us at the end of this season.

2. Pest and Diseases – Symptoms not Causes 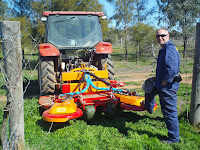 The organic view on pests and diseases is that they are natures “rubbish collectors”. One of Australia’s seminal little organic gardening books, Natural Control of Garden Pests by Jackie French, says that “Pests help to cull out weak specimens“. And here is another quote that is as relevant now as when we first read it 13 years ago: “At best we only understand a few of the complex relationships around us. Attempts to control them may lead to disaster. Instead, we need to learn to work with the processes around us, and to interfere as little as possible“. The control to which Jackie refers is the use of “systemic” chemicals which are absorbed into and translocated throughout the plant to kill invading pests or diseases from the inside. This is what stops most grape growers we know from taking the organic plunge – they still want to be able to use their “DMI’s” (the most common systemic fungicides) to control powdery mildew. Well, they are not permitted in organic farming, so you have to minimise disease through plant health, or by altering the conditions to reduce the disease, for example, by opening the canopy to air and light. The organic standards do allow plenty of good, safe options, such as sprays of soap or milk, bicarbonate of soda, vegetable oils, diluted elemental sulfur or biodynamic silica to strengthen the leaves against attack. Similarly for insect pests – a recurring seasonal infestation is probably a symptom of unhealthy plants and/or an unbalanced ecosystem due to overuse of pesticides. By not spraying you actually encourage beneficial parasites and predators to keep the pests in natural balance. Failing this you can apply natural or biological products to control them – but only if you see the problem early enough. Weeds also increase the diversity of habitats for beneficial insects. For example, small flowered plants are great for predatory wasps, which lay their eggs inside pest caterpillars!

On Rosnay, there have been seasons where there were so many caterpillars in the grass that the mower seems to be moving when you looked at it due to the sheer number of them that ended up on it after mowing a row of vines. But they never ended up causing damage to the vines, because there were also so many other insects that predated or parasitised them. Since about 2000, we have not controlled pests in any way, and since about 2007, we have not sprayed anything on the vines for powdery mildew except sulfur on the most susceptible variety, chardonnay, and only early in the season.

3. Feed the soil, not the plant
To quote Jackie again, “If you have pest problems in your garden, improve your soil with mulch and compost“. That’s why organic farmers apply natural forms of fertiliser, such as compost and worm cast, building the soil’s organic matter, humus and biological activity. Animals are also essential, transforming cover crops into manure, to return to the soil as humus to feed the plants naturally. Artificial, water-soluble fertilisers actually make the plants unhealthy, because they force their way into the plants when the plants only wants a drink of water. The vigorous but soft, sappy growth is susceptible to pests and disease. However, when humus and the soil ecosystem are well developed, and no artificial fertilisers are applied, the vine can drink clean water, or it can absorb nutrients, as required, and it is therefore healthier and the fruit is more nutritious.

On Rosnay, we have used a mix of these methods, though they have not always worked perfectly. For example, we have applied green waste mulch from the Cowra tip as a mulch to our poorest performing variety, only to find it performed even worse afterwards. We now believe this was due to nitrogen being taken from the soil by the breakdown of the carbon-rich wood chips in the mulch. Of course, we cant just blame the mulch – the vines also needed more water, which we didn’t have.

Are you with us?

This post tries to explain why we farm Rosnay organically. Whether or not it has convinced you of the value of organic farming, let me just say how amazingly positive to live on a farm that doesn’t smell of Roundup and other common farm chemicals. I used to work on conventional farms, spraying herbicides that would give a headache at the end of each day spraying. Hypochondriac maybe, but there is more and more proof emerging that chemical exposure is bad for us long term – eg leukemia in children. Many believe that farm chemicals go hand in hand with the creation of “mega farms” and corporate land-grabbing – as they allow savings in labour and simplification of management. Likewise with genetic engineering of crops, where chemicals must be used or putting toxins into plants themselves.

No doubt these are controversial statements and hopefully they will lead to a few comments and questions, but they are simply my experience as an organic farmer surrounded by conventional farmers who use chemicals and GM seeds. Thanks for your interest.