Happy New Year from Rosnay, and reflections on 2010

We would like to wish all our friends and customers a happy, fruitful, and organic 2011.

Thanks for your support and appreciation of good food and wine, grown naturally and without chemicals.

As we say goodbye to 2010 we’d like to mention a few of the highlights of the year that passed so quickly for us here at Rosnay:

Dancing in the rain: Whilst there has been too much rain across the eastern states, including at Rosnay, we still feel like dancing in it. In fact the rain also brought with it some of the mildest spring and summer weather we have known here in 13 years, with nothing that we would call “hot” until New Years Day, which has now already cooled off with another rainstorm. The vines are performing very well and we are expecting a good “cool climate” harvest despite the rempaging mildew across the region. Whilst we are beginning to see some vines showing signs of tiredness in the canopy due to the constant disease pressure, we remain optimistic that the mild conditions will result in good acid retention and balanced, light to medium bodied wines in 2011. We expect harvest to begin in the first half of February for the sparkling white, continuing until April for the Cabernet Sauvignon.

Improving the vineyard: The drought years showed up which grape vines were the most drought resistant, and the Mourverdre, from the South of France, has been the star performer. About 5000 cuttings from the Mourverdre vineyard are now growing in nursery rows among the figs, and we expect to plant them in 2012 as part of our ongoing vineyard improvement program. 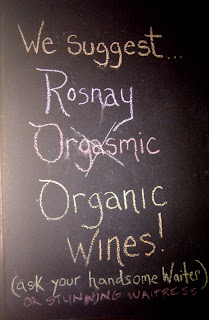 Winning wine awards: We dont often go on about our wines and their reviews, but a highlight of recognition came from WineState, one of Australia’s oldest and most respected ratings magazines, placing the Rosnay 2006 Cabernet Sauvignon in the list of the best Cabernet Sauvignons in NSW in their most recent issue. The ability of our wines to age well was also shown by the Australia-New Zealand Organic Wine Show where the 06 reds took out all of the medals in the museum class. Our range of wines has been picking up various medals, including silver medals for the 2008 Triple Blend in the Cowra Wine Show and in the NSW Wine Awards (just missing out on the best organic wine award). Meanwhile, the sparkling wines have gone from strength to strength, with the white selling our completely for the 2nd year running and the Rose now taking off in Australia and in Japan.

Not a huge olive harvest: In 2010 we got a very small harvest of olive oil, as many of our customers would know, mainly due to the drought. The good news is that 2011 is looking fantastic for Rosnay olive oil. In the table olive department, the 2009-2010 drought affected them too, but mainly because the February rains caused the fruit to swell, with the subsequent dry spell causing them to shrink again, but with wrinkles. Whilst the 2010 harvest was up on past years, we have had to hand grade out a higher percentage of second grade fruit which we have begun making into some fantastic olive paste. We would welcome any feedback from our customers as to new uses for olive paste. The 2011 crop is looking good too, but it still has a long way to go until harvest in June-July.

A year of great partnerships: Thanks to all of our partners in 2010, and we hope to do more with you in 2011. In terms of great events, it will be  hard to top the night we had in March watching the very best of Flickerfest, Australia’s only Academy Accredited short film festival. As the wine sponsors agin this year, we are looking forward to Flickerfest coming back to Rosnay on 26 March 2011. Some of the other sponsored events and causes of 2010 included the Sydney Underground Film Festival, Tipping Point environmental conference, Australian Youth Climate Coalition, Australian Student Environment Network, Australian National Botanical Gardens, Corinbank Festival, Greenpeace, Kaleidoscope Gallery, Shane Rozario, Sydney Food Fairness Alliance, Short and Sweet, MINDD foundation, Sydney Greenway Festival, and Vision Australia. As an organic wine company we are finding it very satisfying to be invited to partner with such fantastic organisations, and if you are an arts, health or environmental charity we would welcome your sponsorship proposal for 2011 and we will do our best to consider it and give our support.

Opening Rosnay up to guests: A highlight has also been the launch of our cottage, which sleeps up to 6 people and has opened Rosnay up to many more visitors and tours of the vineyards. Again, we love doing this as its much better to explain the ins and outs of organic and biodynamic agriculture and organic wine when you are in the vineyard itself. We look forward to this tourism activity growing in 2011. In 2010 it was amazing to see young Molly (Sam and Simone’s 4 year old daughter) helping with the farm tours with great enthusiasm. Sam and Simone are now anxiously awaiting the arrival of their third child.

We would especially like to thank the wwoofers who graced Rosnay in 2010, adding so much to the cultural life here, as well as helping out a lot.

Welcoming new team members: We would like to thank all of our customers for their business in 2010, and also our sales team which now includes some enthusiastic new people: Jaxon Valentine and Christian Gibson in Sydney, Jeff Clements in the Blue Mountains, Z4 wines in the ACT and the NSW south coast, and Robert Beullens and Owen Smythe in Melbourne. Our existing team members Lorraine Thomas, Steve Brown and Andrew Watts have also grown their trade customer base through provision of great service, for which we are very grateful. We are currently on the lookout for a rep on the NSW central coast and the many areas on our store locator where there are gaps. In the Rosnay farm office we also now have the privilege of having our neighbour, MYOB guru, and organic olive grower Sue Brown helping Sam and Richard to get on top of the books, which was never our forte.

Thanks again, have a great year, and we hope to see you out here soon!

Cheers, the Stathams at Rosnay