Growth of an organic farming community

Before white settlement, this was a white box and yellow box grassy woodland, most of which was cleared as government policy. Richard and Florence moved to Rosnay in 1996 and the farm was mostly cleared of trees and its soils were powdery and hardsetting, with little organic matter, no porous structure and highly acidic (pH 4.8). Such soils are a common product of intensive cropping with artificial fertilisers, herbicides, cultivation and stubble burning. The farm was continuously cropped during the 1970’s and 1980’s, then had a brief respite as a cattle stud in the early 1990’s. Much soil erosion had occurred, with little topsoil left in some places. Gullies had been created by the runoff, exposing steel and wire dumps simply covered with soil, in past generations, and needing to be moved.

To recreate some microclimate and habitat, in their first years at Rosnay the Stathams planted thousands of native trees. At least 40 species of birds now live in these tree belts, and native grasses are returning of their own accord. A decade later, through the use of organic farming techniques as described below, the soil of Rosnay has been brought back to life, and is teeming with worms and organic matter.

In 1997 the Stathams surveyed, soil tested and redesigned the 140 hectare farm, and by the year 2000 they had planted 20 hectares of vines and 10 hectares of olives, organically from day one. They grew some vegetables and trial blocks of fruit trees, of which figs have been the most successful. 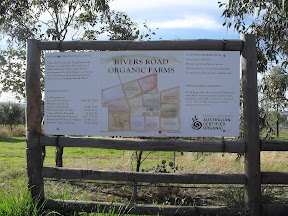 In 1998, the Stathams decided to broaden the project by creating a unique subdivision of the farm under Community Title. Hence Rosnay became part of what is now called Rivers Road Organic Farms (RROF). RROF is a unique model of rural development, which uses organic certification to assist in the sustainability and harmony of multiple small growers. A Neighbourhood Association owns and manages water distribution, buffer zones, native revegetation and roadways. The original farm was divided into 12 irrigated farm blocks and ten fully serviced house lots on a ridge in the middle of the farms. All housing construction is of ecological design and materials, especially strawbale and mudbrick.
It took eight years from the initiation of the project in 1998, to complete the surveying, detailed soil mapping, lodgement with Council and the Lands Department, installation of irrigation, power and phone services, gravelling of roads, planting of trees, and finding a total of six other like minded growers to join.

RROF has become a vibrant group of individual growers with a variety of approaches but a common goal – viable organic farming. Crops include vines and olives, figs and vegetables. Various forms of cooperation are in place, including a livestock grazing partnership and sharefarming ventures. For info see www.organicfarms.com.au .