The Triple Blend is Rosnay’s signature red wine. It is made for balance and complexity through blending, rather than expressing pure varietal character. The blend combines the bold and rich fruit of Cabernet Sauvignon, the spice and pepper of Shiraz, and the velvet texture of Merlot.

Whilst Rosnay vineyards include 8 hectares of Shiraz, and 4 hectares of Cabernet, only 2 hectares of Merlot are grown, making it the limiting factor in the amount of Triple Blend produced each year. No varietal Merlot has been bottled so far.

As in all the Rosnay wines, the Triple Blend is made with minimal intervention, very low sulfur and minimal oak. Bottled under screw cap (the first of the Rosnay reds to move over), it is bold and youthful, and whilst drinking well now it still benefits from breathing before serving.

Compared to past vintages we believe the 2008 is similar to the 2003 and 2005 vintages, with more solid body but still some clean, firm tannins with soft edges and plenty of fruit. As is the 2008 Shiraz, the 2008 Triple Blend is consistent in reviews and acclaim from wine shows and consumers. The 2008 won bronze medals in national wine shows in 2009, 2010 and 2012 and features with Four Stars among Australia’s most iconic wines in the famous “Gold Book” written by renowned Master of Wine, Rob Geddes: 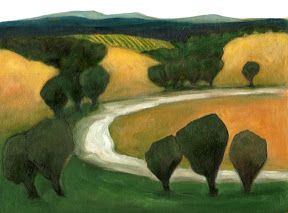 Cabernet, shiraz and merlot here have tart tangy fruit with a slight drying finish and although these wines have no cranberries in them, they offer the positive flavour and texture effects of drinking the juice with distinctive medium-weight tannins, high-ish acidity, bright fruit and classic astringent finish. Very consistent style.